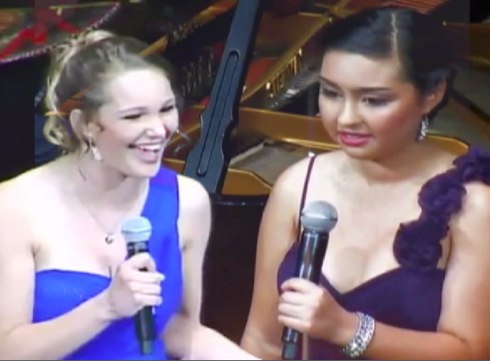 Both students are in the vocal studio of Melanie Alpert and also participated in studio acting workshops led by Brandon Alpert and Danny Gurwin.

The Great American Songbook Vocal Academy & Competition began in 2009, and is the only competition in the United States based solely on music from Broadway, Hollywood musicals and the Tin Pan Alley era of the early to mid-twentieth century.

Students from across the country participate in a competitive audition process for the chance to attend 2-day regional academies and competitions. Winners from these regional events will travel to the Indianapolis area for a five-day comprehensive â€œboot-campâ€ on interpreting and performing the music of the Great American Songbook. Led by local and national celebrity performers and professionals, workshops will cover topics ranging from breathing and microphone techniques to one-on-one coaching and master-classes. The classes are intended to prepare finalists for the Final Competition performance at the Palladium in Carmel, IN when each student performs two songs and the top three winners will be announced.

Congratulations to Genevieve and Kelly for representing the Western US Region, as well as the Studio, in such great style!