Melanie Alpert cast in King and I 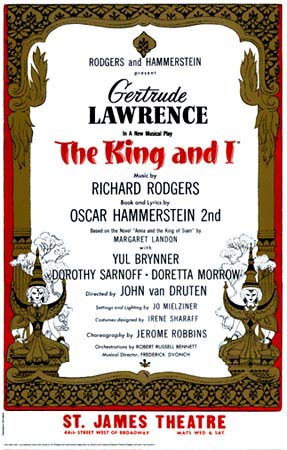 I’m proud to announce that Melanie Alpert was recently cast in the role of Lady Thiang in an upcoming professional production of King and I at Performance Riverside. Performances run from Feb. 1 – 10. The Rodgers and Hammerstein classic will be directed by John Vaughn, and will also feature Barbara Hinrichesen in the role of Anna and studio student Michael Stugis as Louis.

Based on the novel Anna and the King of Siam by Margaret Landon, the musical has been a favorite of audiences since its original 1951 Broadway production.

From Wikipedia: The musical opened on Broadway at the St. James Theatre on March 29, 1951 and starred Gertrude Lawrence as Anna, and a then mostly unknown Yul Brynner as the King. The production was directed by John Van Druten, choreographed by Jerome Robbins, with scenic and lighting design by Jo Mielziner, and costumes designed by Irene Sharaff. Of course Brynner appeared in the 1956 film version, opposite Deborah Kerr.

I hope the our entire studio family will come out and support Barbara and Melanie in what is shaping up to be a wonderful and enjoyable production. For information visit Performance Riverside’s Website

We are so excited to hear the great news! Congratulations to all three of you! I love the music in “The King and I”. It is one of our favorites! Way to go!(=