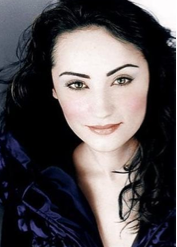 Eden Espinosa from the cast of Wicked

Eden Espinosa began singing at the age of three and performing at age five.1 After graduating from Canyon High School, she worked at local theme parks prior to being discovered by the BKLYN casting director. Espinosa worked on creating the title role of the musical at the Denver Civic Theatre for nearly two years. Prior to BKLYN’s Broadway run at the Plymouth Theatre, Eden made her Broadway debut in the original company of Stephen Schwartz‘s musical Wicked, where she understudied Idina Menzel’s Elphaba. Espinosa departed Wicked in August, 2004. BKLYN began its Broadway run on October 24, 2004 and closed on June 26, 2005. (extracted from Wikipedia)

By reservation only. Sign up early for this very special event, as class sizes are strictly limited