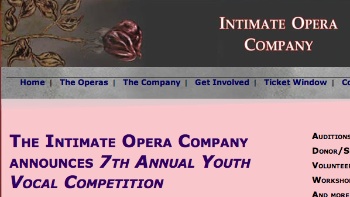 From a field of 62 young Southern California vocalists, only 16 were selected to participate in four different categories during the November 2 final round of the Intimate Opera Vocal Competition. The Alpert studio was represented by three singers in two separate categories: Child (8-13 years) and Junior (14-18 years). Scott Jacobson was honored with third place in the Child category. Sarah Jackson received the Encouragement Award and Michael Sturgis received second place in the Junior category.

Congratulations to all Studio students who participaged in these events.