From String Quartets to Acting Lessons 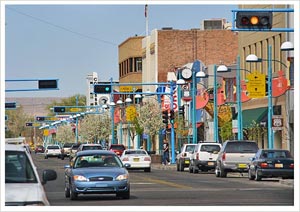 Downtown Albuquerque, NM
I’d be remiss if I let too much time pass without thanking my studio and group students for allowing me the time to visit the recent American String Teachers Association conference in Albuquerque. I made the trip along with my dear friend and orchestra colleague, cellist Kyle Champion. Also making the trip were something like 2000 string teachers and students from across the USA and beyond, including fellow FSS instructor Wendy Waggener, and Redlands Symphony harpist Mary Dropkin.

New Mexico was beautiful and sunny; the workshops and concerts were inspirational as was the camaraderie and spirt surrounding the event. Certainly string teachers are a diverse group, yet within that group one can find a spirit of generosity and dedication to a common purpose.

Of special note: a recital by violinist Joshua Bell and pianist Jeremy Denk. I heard Josh Bell play a the Mendelssohn Concerto with the LA Phil a couple of years ago; it was indeed an impressive concert. But this recital, which included works by Tartini, Prokofiev, Schumann and Saint-SaÃ©ns was even more so. Bell and Denk donated their time to ASTA, and were equally generous with the playing. I can’t remember any musician with as much celebrity as Bell putting so much energy into an evening of music, from first note to last. This while the duo needed to pack up and catch a red eye back to the east coast the very same evening. The music was transcendent; one could have heard a pin drop during the quiet moments in the packed full Kiva Auditorium.

Bell made many an ASTA attendant beam when he thanked the organization from the stage. His big break came after winning an ASTA competition in Minneapolis. A year later he was playing with the Philadelphia Orchestra. Another surprise from the stage: Bell dedicated his encore: March from the Love of Three Oranges, to “his idol” Jascha Heifetz, who penned the venerable Prokofiev arrangement. To me it was a surprise comment from a young player whose extroverted approach seems so different than that of Mr. Heifetz.

Another notable concert: that of the Shanghai Quartet. This virtuostic and innovative group didn’t draw the the big crowds of Bell’s recital. Too bad for those who missed another spectacular evening of all out, take-a-lot-of-chances music making. Perhaps string quartets have an undeserved reputation for being a bit cerebral. Certainly that wouldn’t apply to this group of four young musicians, now resident at Montclair State University in New Jersey. Check out a recording of violinist Yi-Wen Jiang’s quartet arrangements of traditional Chinese folk songs; they are gorgeous and ravishing, expertly written.

Dozens of musicians, artists and educators presented workshops. Mark O’Connor talked about (and demonstrated!) his “New American Classical Music.” My own idol, violinist Darol Anger, led several sessions on jazz and alternative styles. He’s every bit the musical genius that Josh Bell is, in his own unique way. Somehow he manages to touch the deepest part of me, every time I hear him play, even if it’s just a simple old fiddle tune. And there were the youth honor orchestras and ensembles; it’s impressive to see these kids playing so well and excelling in their lives. Kudos!

As my friend Kyle pointed out, a recurring theme for me was attending sessions that focussed on Yoga, Alexander Technique, acting exercises, singing, shoulder injuries and custom fitted chin rests. More and more, I’m realizing the skills of using the body properly, releasing tension and being “in the moment” are vitally important to me and my students. Students: you’ll be hearing more about this in the studio soon!

So again, thanks to all my students, as well as my very first teacher violin teacher Marjorie Marth, who covered my Suzuki group classes while I was gone, and of course to the dedicated folks at ASTA, who put on one of the best conferences ever!